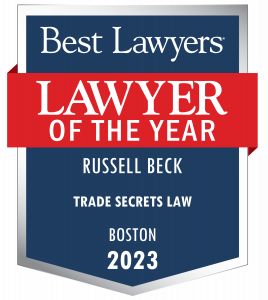 Called “one of the foremost trade secret litigators in the country,” named a “Lawyer of the Year” for 2022 and 2023 by Best Lawyers and by Massachusetts Lawyers Weekly in 2019, and included in the Top 10 Lawyers in Massachusetts by Super Lawyers® since 2020, Russell has over 30 years of experience as a complex business, trade secrets, and noncompete litigator, representing clients throughout the country. 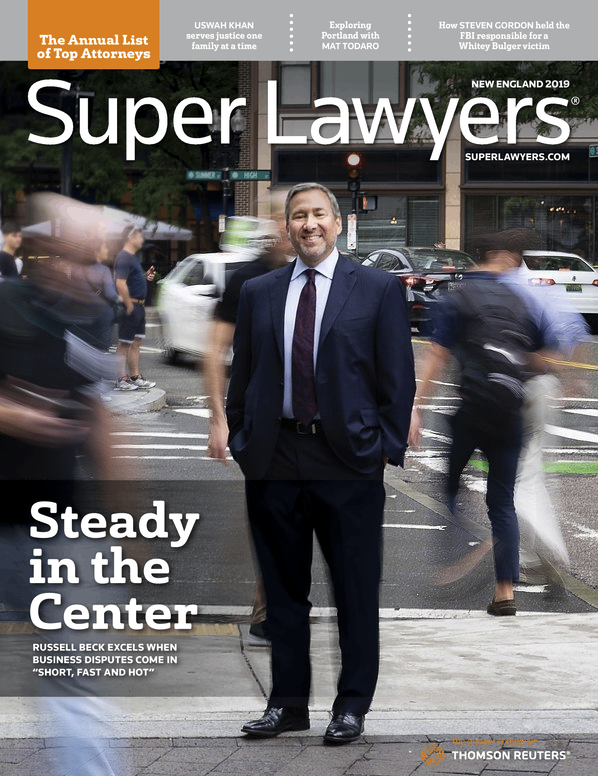 He has been quoted and his work cited in The Wall Street Journal, The New York Times, The Boston Globe, The Boston Herald, Fortune, CNBC, and Le Monde, as well as by the White House and the United States Treasury Department. He has also been interviewed on PBS Newshour, On Point (NPR/WBUR), Weekend Edition (NPR), and NECN News, and was featured in the cover story of Super Lawyers New England Magazine.

Russell also founded and chaired Foley & Lardner LLP’s Trade Secret / Noncompete Practice and created and teaches Trade Secrets and Restrictive Covenants at Boston University School of Law. (Boston University’s Intellectual Property program, of which Russell’s course is a part, has been ranked in the top 10 in the country by U.S. News and World Reports.)

Immediately prior to founding Beck Reed Riden LLP, Russell was a partner with Foley & Lardner LLP and chair of the firm’s Trade Secret/Noncompete Practice. He previously was a partner at Epstein Becker & Green, PC, and an associate at Reynolds Rappaport & Kaplan and Simpson Thacher & Bartlett. Russell was also an instructor in the Boston University Law School’s First Year Writing Program.

Russell is the President of the Boston Bar Foundation and a Fellow of the Litigation Counsel of America (LCA), a trial lawyer honorary society representing less than one-half of one percent of American lawyers. Selected to Super Lawyer’s Top 10 Lawyers in Massachusetts since 2020, he has been selected as one of Super Lawyers’ Top 100 Lawyers in New England and Top 100 Lawyers in Massachusetts every year since 2011, featured in the cover story of Super Lawyers New England Magazine, and is included in Best Lawyers and Chambers and Partners, which states, “He is widely considered ‘an expert in his field.’”

And, his work is recognized by The Legal 500 United States, helping Beck Reed Riden to be the only small firm selected for inclusion in the Trade Secrets rankings. Some of the testimonials provide: “Russell Beck is one of the foremost trade secret litigators in the country,” “Russell’s approach to litigation also differentiates him from competitors. Although his firm is small, he can litigate with anyone and can do so in a cost-effective manner. His results for his clients speak for themselves.”

Russell is a trained mediator.

In addition to the countless mediations he has handled for his clients over the course of more than 30 years, Russell serves as a mediator on commercial matters, including disputes involving trade secrets, noncompetes and other restrictive covenants, and trademarks, as well as other business disputes.

In addition, Russell has previously served in the following roles:

In addition to administering the award-winning Fair Competition Law blog, Russell writes, lectures, and is quoted or cited in connection with various intellectual property and other legal issues, including enforcement and defense of noncompete agreements, protection of trade secrets, trademark disputes, copyright issues, arbitration, and mediation. Recent representative presentations and publications include:

Top 10 Lawyers in Massachusetts, Super Lawyers® (all years since 2020)

U.S. Court of Appeals for the First Circuit

U.S. Court of Appeals for the Fourth Circuit

U.S. District Court for the District of Massachusetts

U.S. District Court for the Southern District of New York

U.S. District Court for the District of Wisconsin