you happened to pick up a comic book from the 1950s, you may have come across an advertisement for the Junior Sales Club of America. 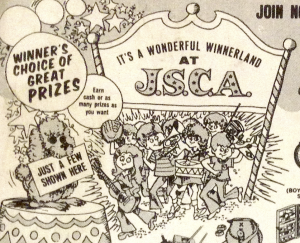 The Junior Sales Club of America (JSCA) was a family-owned greeting card company that promoted its products by incentivizing kids to sell boxed assortments of cards in exchange for money and prizes. A young entrepreneur who sold enough cards could win exciting prizes, like a compass, a camp stove, oreven an air rifle. With a business model that embodied the American dream, JSCA became a symbol of bygone era. However, behind the scenes of Junior Sales Club of America’s cheerful ads, there was conflict, division, and a bitter legal battle. The story of this closely held, family business unfolds in a 1982 Massachusetts Appeals Court case named O’Hara v. Robbins.

In The Company Of Family And Friends

In 1953, the Robbins family started Sunshine Art Studios, Inc., a company that manufactured and sold greeting cards. Willard S. Robbins held 50% of the shares. His wife, Grace B. Robbins, held 10% and their son, Ryland E. Robbins, held the remaining 40%. Ryland’s college classmate and friend, Arthur P. O’Hara, worked for Sunshine in charge of promotions and sales. In 1954, Arthur proposed a novel business model by which the company would give prize and money incentives to young people to sell Sunshine greeting cards. The model was implemented under the name of Junior Sales Club of America. After JSCA was 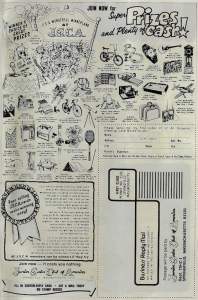 incorporated, Arthur was given a certificate for 20% of the shares, and Ryland and Willard each kept 40% ownership of the company. Although he never invested in JSCA, or negotiated for the shares, Arthur’s salary reflected 20% of JSCA’s profits.

A Shareholder Left Out In The Cold

Two years after proposing the novel sales incentive program, Arthur proposed another program that would operate essentially the same as JSCA but offer better incentives for sellers and sponsors. Arthur’s new business idea became a reality when he and his business partners started a new company: Sales Leadership Club, Inc. (Sales Leadership). Unfortunately for Arthur, however, a partnership tax return filed in 1958 named only Willard, the father, and Ryland, the son, as

partners. Then, in 1959, Arthur was told that he did not own interest in Sales Leadership. Nevertheless, Arthur was paid a percentage of the profits for the next three years. Further, money from JSCA was used in part to fund the expenses of Sales Leadership. Arthur continued to work for Sunshine until 1965, when he resigned from the Robbins companies over an unrelated dispute. Arthur asked for shares in Sales Leadership after he resigned from the company, but the Robbins family refused.

Shareholders’ Duties In A Close Corporation

Shareholder disputes in close corporations can take many forms. And the type of dispute that landed the co-owners of the Junior Sales Club of America in a courtroom is quite common. Tensions often develop between majority and minority ownership interests. The specific conflict in this case that drove a wedge between business partners was the father and son’s breach of the corporate opportunity doctrine. The corporate opportunity doctrine stands for the legal principle that directors, officers, and majority shareholders may not usurp a beneficial business opportunity without first presenting it to the corporation.

The corporate opportunity doctrine stems from the fiduciary duty of loyalty, which generally prohibits directors, officers, and shareholders from stealing assets, self-dealing, engaging in insider trading, and otherwise advancing personal interests to the detriment of the corporation. Owners, officers, and directors also have the duty of care, the obligation to exercise reasonable care when making decisions on behalf of the corporation. Although some instances of misconduct (e.g., embezzlement) are obvious, other situations are not as clear. This may be the case, for example, when the opportunity involves business that is related but not identical to the business of the corporation.

When Conflict Leads To A Lawsuit

Where a shareholder, director, or officer of a close corporation has violated duties to the corporation itself, any shareholder or director may bring a derivative suit on behalf the corporation. And where the wrongful actions have harmed a shareholder’s interests, the shareholder may bring a direct suit to seek personal relief. Here, Arthur was able to sue his business partners directly because his personal interests as minority shareholder of JSCA were harmed when the Robbins—who were both directors, officers, and majority shareholders of JSCA—diverted business to a competing enterprise: Sales Leadership. Whether or not an act breaches one’s fiduciary duty often depends on the specific facts of each case, and it is therefore advisable to seek legal advice early on in the decision-making process.

Beck Reed Riden LLP is committed to developing custom-fit, appropriate solutions for the complex relationships that are inherent in these types of conflicts. Beck Reed Riden LLP can be reached now for a free consultation via email (info@beckreed.com) or telephone (617-500-8660).