The August 15, 2013, print edition of The Wall Street Journal features Russell Beck in an article about noncompete agreements titled “When a New Job Leads to a Lawsuit: Litigation Over Noncompete Clauses Is Rising; Does Entrepreneurship Suffer?” The article is by The Wall Street Journal’s senior special writer, Ruth Simon, and reporter, Angus Loten.

The story, which appears on the front page of the Marketplace section, focuses on the rising use of noncompete agreements by employers.

The number of published U.S. court decisions involving noncompete agreements rose 61% since 2002, to 760 cases last year, according to research that the law firm Beck Reed Riden LLP conducted for The Wall 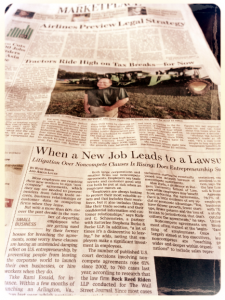 Street Journal. Since most cases are settled out of court and most opinions aren’t reported, that tally is likely low.

Even in states that don’t enforce noncompete agreements, employees can face lawsuits alleging that they have misappropriated trade secrets, says Russell Beck, a partner at Beck Reed who drafted the proposed Massachusetts legislation. Employers are less likely to bring trade-secrets lawsuits because these cases are more costly, often requiring depositions and more extensive discovery. But defending against them is likely to be “more expensive and will have a greater impact on the employee and startup company,” he says.

In the story, Russell Beck also addresses the benefits of noncompete agreements:

Noncompete agreements can offer employers more protection than trade-secrets laws because “there’s a bright-line test,” says Mr. Beck. “The problem with relying on trade-secrets law is that it’s very hard to discover whether somebody has used your trade secrets.” New employers can sometimes limit the impact of noncompete agreements by restricting “the employee to a more narrow role than what had been planned,” Mr. Beck adds.

In a separate article appearing in the online edition of the Wall Street Journal earlier in the week, Russell Beck discussed his experience helping executives negotiate non-competition agreements:

Executives have the most leverage to alter a non-compete before accepting a job offer, legal specialists say. If the company wants a new management hire badly enough, it will make concessions, Russell Beck, a Beck Reed partner, has found.

The lawyer recently represented a Massachusetts executive wooed by a health-care concern to be its vice president of professional services. Mr. Beck persuaded the company to halve a two-year non-compete requirement. “The benefit of having the executive outweighed the risk of harm caused by the executive’s competition after the first year,” he recollects.

Beck Reed Riden LLP is among the leading authorities in trade secret, noncompete, and unfair competition law, and our experience handling these matters is backed by our extensive employment law and business litigation experience. Our hand-picked team combines attorneys with complementary expertise and practical experience.

In addition, Russell was honored for his work in this area of law in the 2013 Chambers USA Guide, which identified Russell as one of its “Notable Practitioners,” stating, “The highly regarded Russell Beck of Beck Reed Riden LLP has an excellent reputation for his work on trade secret and noncompete issues.“