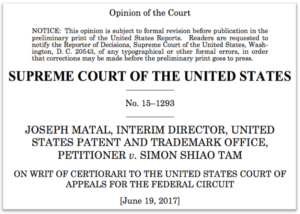 Following Tam, the U.S. Patent and Trademark Office (USPTO) may no longer deny trademark registrations on the basis that the marks may be disparaging. Accordingly, Tam will undoubtedly have far-reaching consequences in the business community (and, not to mention, finally resolve the Washington Redskins case).

Prior to Tam, the Lanham Act’s disparagement clause prohibited the registration of trademarks “which may disparage . . . persons, living or dead, institutions, beliefs, or national symbols, or bring them into contempt, or disrepute . . . .” 15 U.S.C. § 1052(a).

The USPTO would find a prima facie case of disparagement where (1) the trademark referred to “identifiable persons, institutions, beliefs or national symbols,” and (2) a substantial percentage of the referenced group, “in the context of contemporary attitudes,” would consider the mark to be disparaging. Once a prima facie case was made, the burden shifted to the applicant of the mark to prove that the mark was not disparaging. An applicant’s good intentions for the trademark, and his or her status as a member of the referenced group, would have no impact on the USPTO’s analysis in this regard.

Simon Tam is the lead singer of “The Slants,” an Asian-American rock band. He chose the name “The Slants,” a variant of an ethnic slur, in order to reclaim stereotypes about people of Asian ethnicity. 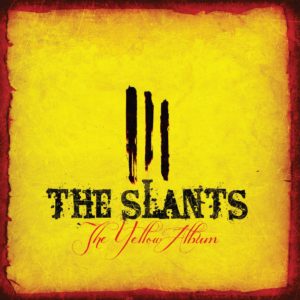 In 2010, Tam applied to register the band name with the USPTO’s principal register. The USPTO rejected the application, finding that “there is . . . a substantial composite of persons who find the term in the applied-for mark offensive.” Tam contested the decision before the examiner and the USPTO’s Trademark Trial and Appeal Board (TTAB), but was denied.

Tam took the case to court, and the Federal Circuit ultimately held that the disparagement clause was facially unconstitutional under the First Amendment’s Free Speech Clause. The court held that the clause engaged in viewpoint-based discrimination, regulating the expressive component of trademarks which cannot be treated as commercial speech, and that the clause could not survive strict scrutiny.

The government filed a petition for certiorari, which the U.S. Supreme Court granted on the issue of whether the disparagement clause is facially invalid under the First Amendment.

Supreme Court Rules that the Disparagement Clause is Unconstitutional

As to the exact basis upon which to strike down the disparagement clause, the Court was evenly split, 4-4.

Justice Alito, joined by the Chief Justice, Justice Thomas, and Justice Breyer, rejected the government’s next argument that this case was governed by cases in which the Court had previously upheld the constitutionality of government programs that subsidized speech expressing a particular viewpoint. Those cases stand for the rule that, while the government “may not deny a benefit to a person on the basis that infringes his constitutionally protected . . . freedom of speech,” the government “is not required to subsidize activities that it does not wish to promote.” If the government could convince the Court that the federal registration of a trademark was a type of subsidy that the government could withhold, it might be able to salvage the disparagement clause on this basis. Justice Alito rejected the argument, however, reasoning that federal trademark registration is nothing like the programs at issue in the subsidies cases (e.g., tax benefits). In this vein, Justice Alito observed that the USPTO does not pay applicants seeking to register a mark – rather, applicants pay the USPTO filing and other fees.

The Alito Opinion similarly found that “government-program” cases involving the collection of union dues by public employers were inapplicable to the registration of trademarks.

Finally, Justice Alito addressed the parties’ dispute regarding whether or not trademarks are commercial speech, which should be subject to relaxed scrutiny. Justice Alito declined to resolve the issue, instead finding that the disparagement clause could not even withstand a relaxed scrutiny analysis. Specifically, Justice Alito held that the disparagement clause was not sufficiently “narrowly drawn” to “drive out trademarks that support invidious discrimination.” Because the clause applied to trademarks that disparage any person, group, or institution, and would therefore apply to trademarks like “Down with racists,” “[i]t is not an anti-discrimination clause; it is a happy-talk clause.” “In this way, it goes much further than is necessary to serve the interest asserted.”

There is also a deeper problem with the argument that commercial speech may be cleansed of any expression likely to cause offense. The commercial market is well stocked with merchandise that disparages prominent figures and groups, and the line between commercial and non-commercial speech is not always clear, as this case illustrates. If affixing the commercial label permits the suppression of any speech that may lead to political or social “volatility,” free speech would be endangered.

In his concurring opinion, Justice Kennedy agreed with Justice Alito that the disparagement clause constituted viewpoint discrimination, “a form of speech suppression so potent that it must be subject to rigorous constitutional scrutiny.”

Joined by Justice Ginsburg, Justice Sotomayor, and Justice Kagan, Justice Kennedy wrote separately to submit that, because the disparagement clause constituted viewpoint discrimination, the Court need not entertain the government’s other arguments.

At its most basic, the test for viewpoint discrimination is whether—within the relevant subject category—the government has singled out a subset of messages for disfavor based on the views expressed. . . . In the instant case, the disparagement clause the Government now seeks to implement and enforce identifies the relevant subject as “persons, living or dead, institutions, beliefs, or national symbols.” 15 U.S.C. § 1052(a). Within that category, an applicant may register a positive or benign mark but not a derogatory one. The law thus reflects the Government’s disapproval of a subset of messages it finds offensive. This is the essence of viewpoint discrimination.

The First Amendment’s viewpoint neutrality principle protects more than the right to identify with a particular side. It protects the right to create and present arguments for particular positions in particular ways, as the speaker chooses. By mandating positivity, the law here might silence dissent and distort the marketplace of ideas.

For these reasons, the Kennedy Opinion held that, “the Court’s cases have long prohibited the government from justifying a First Amendment burden by pointing to the offensiveness of the speech to be suppressed.”

Justice Kennedy reasoned that, because the disparagement clause constituted viewpoint discrimination, regardless of any “corporate speech” or “federal subsidy” designation, it must be subject to heightened scrutiny – a test it could not survive.

Justice Thomas, who mostly joined the opinion of Justice Alito, added “I continue to believe that when the government seeks to restrict truthful speech in order to suppress the ideas it conveys, strict scrutiny is appropriate, whether or not the speech in question may be characterized as ‘commercial.’”

Import of the Decision

With the disparagement clause of the Lanham Act struck down, the USPTO may no longer reject trademark registration applications because the trademarks are disparaging or offensive to a specific group, institution, belief, or symbol. This will undoubtedly result in the registration of myriad words, phrases, and marks that are considered by many to be derogatory. This also leaves the door open for the government to draft a more narrowly-tailored disparagement clause if it chooses to do so.

The Tam case also signals a new chapter that calls into doubt other aspects of well-established trademark law. See 15 U.S.C. § 1052(a) (addressing immoral, deceptive, or scandalous matter). The full import of this case and its effect on the future of trademark law is uncertain.

Hannah T. Joseph, the author of this article, is an attorney with the firm’s litigation group, whose work in intellectual property has been recognized by, among others, the Boston Globe and at the Boston Bar (where she serves as Co-Chair on the Boston Bar Association’s Intellectual Property Committee).

eck Reed Riden LLP is Boston’s innovative litigation boutique. Our hand-picked team of lawyers have years of experience at large law firms, working with clients ranging from Fortune 500 companies to start-ups and individuals. We focus on business litigation and labor and employment, and are recognized as a leading authority in trade secret, noncompete, and unfair competition law. We are experienced litigators and counselors, helping our clients as business partners to resolve issues and develop strategies that best meet our clients’ legal and business needs – before, during, and after litigation. We’re ready to roll up our sleeves and help you. Read more about us, the types of matters we handle, and what we can do for you here.