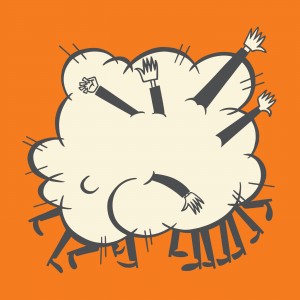 Starting a new business with an old friend is the path to the American Dream for many entrepreneurs. Two famous friends who did just that were Bill Hewlett and Dave Packard, they met in college and worked together to start Hewlett-Packard, one of the most successful technology companies in the world. Legions of startups have followed Hewlett and Packard’s example, with friends getting together to launch countless businesses. Whether it’s launching a food truck or a software app, founders of small businesses face myriad challenges. Sometimes the hardest challenge for co-owners is figuring out how to get along with one another.

recent Massachusetts Superior Court decision details the rocky road traveled by one group of friends who started a business together. The story begins in 1999, when a group of founders, including two high school friends and roommates named Tony Beninati and Steven Borghi, decided to open a gym. Tony and Steven each brought in one additional investor for their business venture.

The four co-owners eventually opened a string of health clubs in New England under the licensed name Work Out World (“WOW”). The group formed fourteen separate limited liability companies to own each club and a fifteenth to centralize management and administration for all of the clubs.

Unfortunately, significant conflicts arose among the co-owners of WOW New England, leading to a lawsuit in Suffolk County Superior Court named Beninati v. Borghi, and eventually resulting in a multi-million dollar verdict against one of the original founders.

To understand how a court views conflicts among owners in a small business, it is first helpful to understand some basics of Massachusetts law concerning close corporation disputes.

What Is A Close Corporation?

A close corporation is a corporation for which no ready market exists for the trading of its shares. Thus, the shares are neither publicly traded on a stock exchange nor can they be sold to members of the public. The shares of a close corporation are held by a small number of shareholders or investors, who are usually heavily involved in the management and day-to-day operations of the business.

Typically a close corporation is a family business or one that is owned by a small group of investors. It can range from a mom-and-pop restaurant to an IT consulting company.

In the Beninati v. Borghi case, since the business was formed as a set of limited liability companies, the court treated the companies as closely-held business entities.

Shareholders’ Duties In A Close Corporation

As a general matter, stockholders of a close corporation owe each other a duty of utmost good faith and loyalty. They cannot act in self-interest where it will harm the company.

When Conflict Leads To A Lawsuit

The group’s dynamic changed when Tony passed away and his wife, Elizabeth, took his place. Disagreements arose, most importantly over the issue of expansion. Steven was looking to add more clubs whereas Elizabeth and another owner had misgivings about Steven’s proposals.

Taking matters into his own hands, Steven joined forces with Harold Dixon, an experienced franchisor, to pursue his expansion dreams. Together, Steven and Harold formed Blast Fitness and opened their own string of competing WOW health clubs in New England.

The remaining members of the WOW New England group were not pleased to learn that one of their co-owners was setting up new gyms in competition with WOW New England, so they brought a lawsuit against Steven and Harold in the Superior Court of Massachusetts.

Because Steven took matters into his own hands and started competing health clubs, the court ruled that he violated his fiduciary duties to WOW New England in the following ways.

In 2014, the court found Steven liable and awarded damages to his co-owners, including $1.5 million for use of WOW New England’s advertising and $2.5 million in royalty payments.

Whether or not an act breaches one’s fiduciary duty often depends on the specific facts of each case, and it is therefore advisable to seek legal advice early on in the decision-making process.

With years of experience representing partners, owners, and family members in a variety of corporate disputes, Russell Beck and Stephen Riden provide thoughtful guidance to business owners involved in shareholder disputes. Beck Reed Riden LLP is committed to developing custom-fit, appropriate solutions for the complex relationships that are inherent in these types of conflicts. Beck Reed Riden LLP can be reached now for a free consultation via email (info@beckreed.com) or telephone (617-500-8660).